Got the opportunity to test the prototypes of the new Mapper30 boards that Broke Studio will have for sale (via their website) in 2020.

The boards are of very good quality. And fully compatible with NESmaker (-> "Make the Cart").
Also tested with a bunch of NESmaker games too (Troll burner for the animated tiles, Doodle World & Dimension shift for the scrolling, Artix DnD for the saving features,... Underground Adventure for 2 players, ...)

Broke Studio is a french studio. They developed Twin Dragons and they distribute Micro Mages, Nebs n Debs, Project Blue,... in Europe.
So for European NESmakers, it would cost less than importing from INL lives (USA). Prices have not yet been announced. 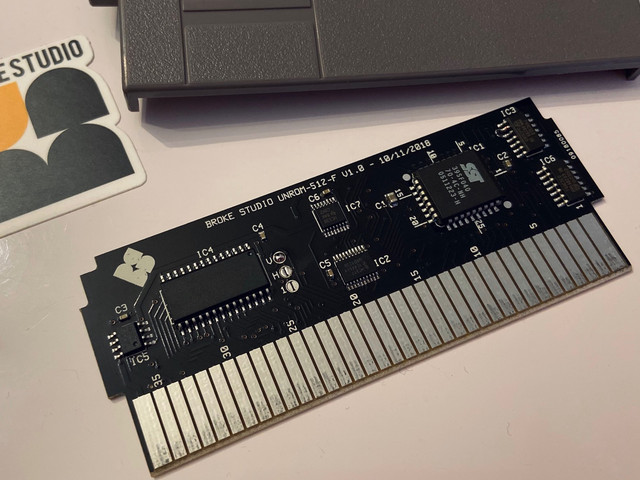 (note: on that prototype board, I sold myself the vertical mirroring jumper... it's the reason the soldering looks ugly :p But Broke Studio would ship already prepared ones... plug-flash-and-play!)
-----
Sorry about my poor english
All I need: A Damn Fine Cup of Coffee
My games: PRESS START GAME / UNDERGROUND ADVENTURE / UNDERGROUND ADVENTURE (Arcade version - Byte-Off-2019)
Top

do these support the software mirroring selection that INL cartridges use ?
"what are you up to?" "Oh, not much... just... Parallaxing"
- Raftronaut
Top

yeah, i saw it.
the INL boards have the jumper too, but they also support setting the mirroring without soldering anything to the board.
i use this with my own cartridge (nesmaker's flashing script is hardcoded to not change the mapper setting, so it has to be modified for that.)
Paul gave me a script that allows changing the mirroring mode when flashing through the flasher instead of soldering it, which is what im curious about.

it's a pretty important feature for a development cartridge since if you work on multiple things, you might not want to repeatedly solder the board to change the mirroring heh.
"what are you up to?" "Oh, not much... just... Parallaxing"
- Raftronaut
Top

i see.
thanks for checking it out.