This is a game I've been at work on where you play a dog. Roam around your home and neighborhood chasing squirrels and do other dog stuff.

It is based on the adventure module with several modifications to the scripting that I hope will make the game stand out.

features:
-8 directional movement/attacking
-enemies run away when hit
-Charge up projectile system - hold down a button to growl and charge up your bark. When you release the button, a bark in the form of a soundwave projectile is launched. the longer you charge up/growl, the further the bark goes!
-diverse enemies with unique behaviour (not just squirrels, but skunks, cats, porcupines, and some other surprises / bosses
-large map that includes a park, streets, houses, and others

I'm currently focusing on getting the core gameplay to be fun and reliable while making a large and varied map to roam around in. Once that is done, Goals and missions will be added that unlock areas and give a narrative.

I'm still learning more about 6502 assembly and getting better as I go thanks in a large part to this forum. I hope to eventually be able to help others just as much. 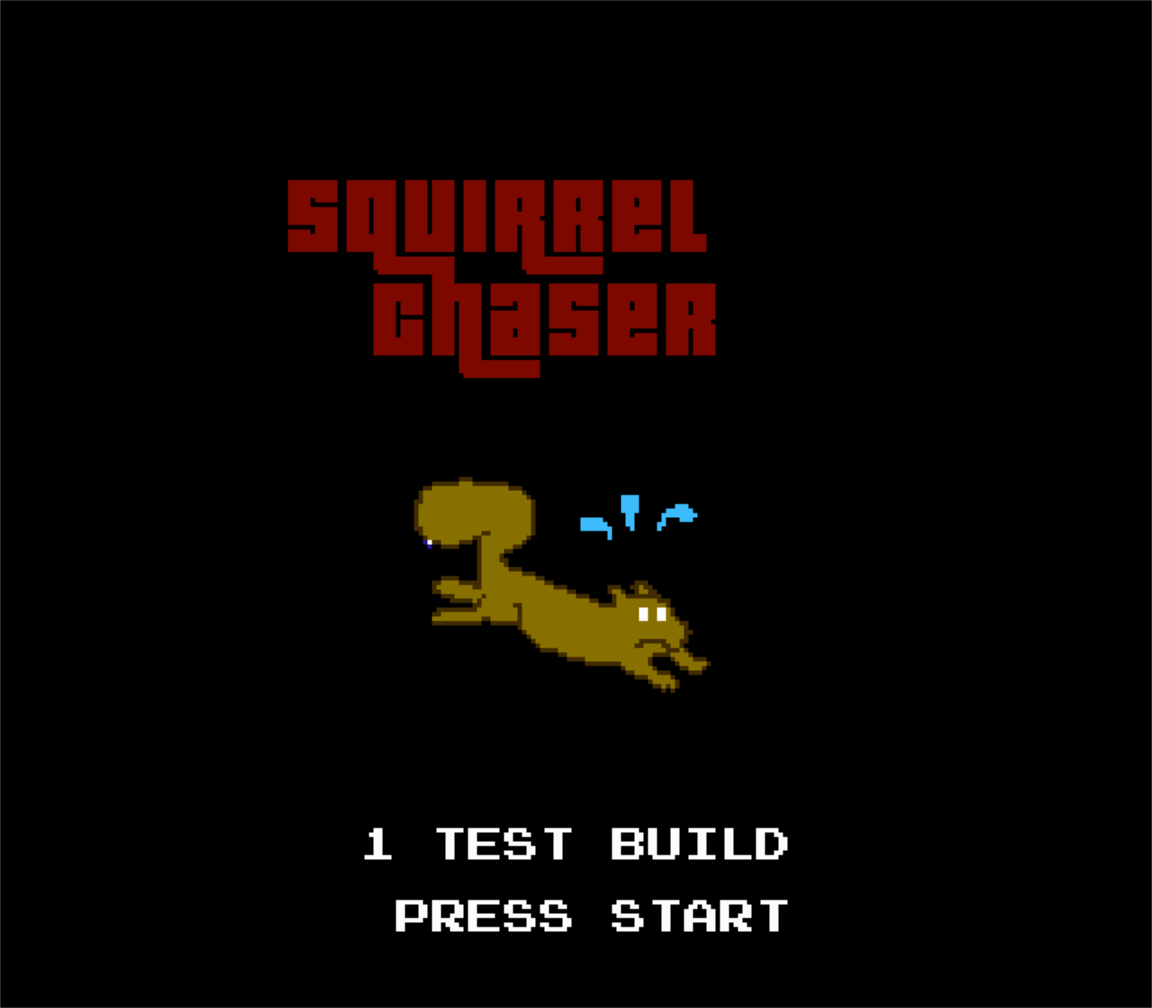 title screen, like most of the art, is in progress and sort of a placeholder for now. 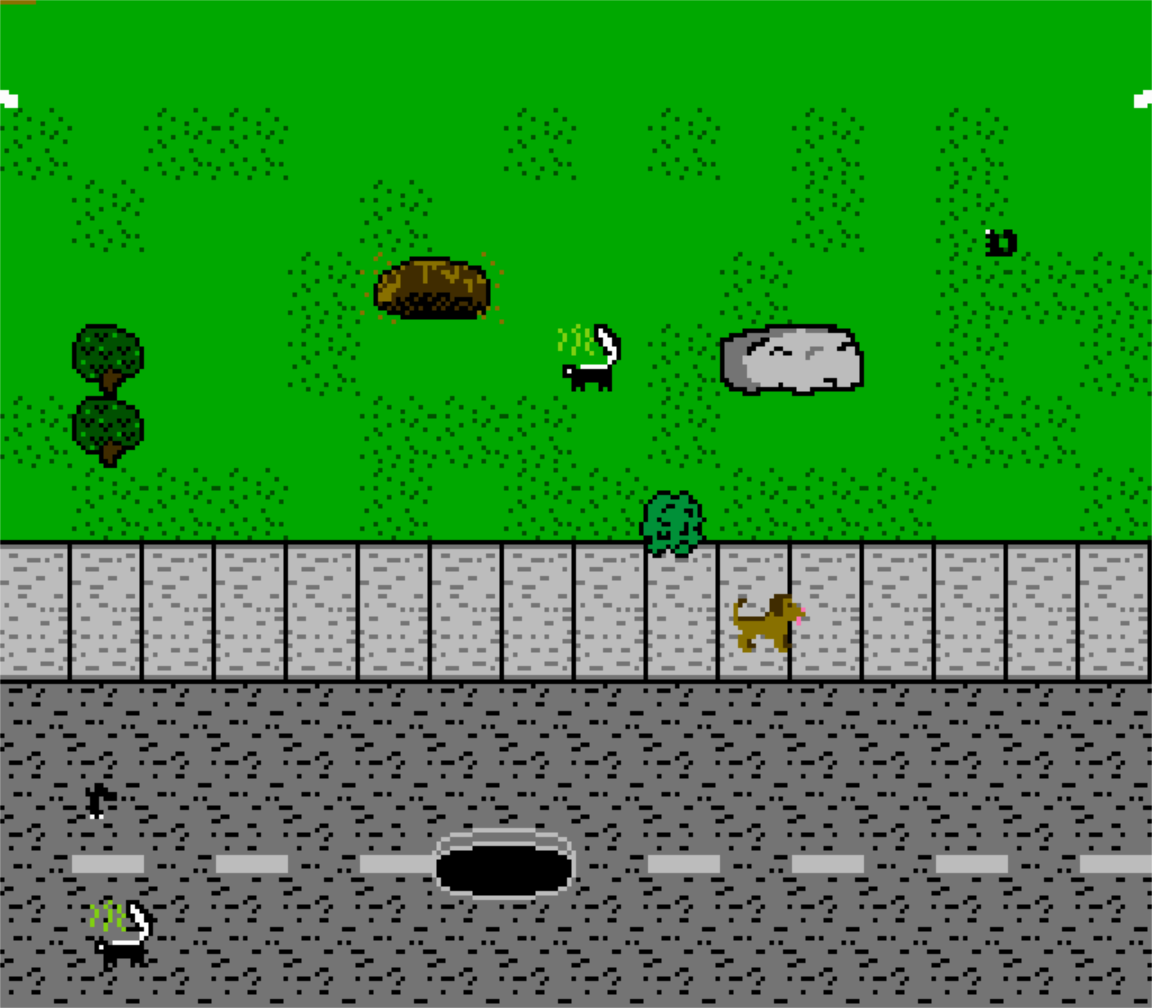 growl animation. growling gets faster the longer you hold down fire.
Last edited by SciNEStist on Wed Mar 11, 2020 2:37 am, edited 5 times in total.
SQUIRREL CHASER -In development
Top

That sounds like a blast, and it's looking great so far! Eager to see how it develops.
Death is no barrier to science!

I too cannot wait to play this!
Top

Love the third screenshot. That is some very 90s house decor.
Top

Thought I would put out a video showing a little of what has been made so far. Still very early days, but I'm just getting started.

This is great progress, it is nice to see a complicated 8 way movement with sprites set up that way. And he cat boss was amazing! Loved it!
Top

Is the sound in stereo? How? I thought the NES didn't support it.
Top

The built in nesmaker emulator puts the 2nd pulse wave on the right channel and the 1st on the left. Since my music is only using the 1st and my sfx only the 2nd, thats why we got the separation.


I suspect they did it that way for this exact reason, so we can tell the difference between sfx and music while developing.
SQUIRREL CHASER -In development
Top

To celebrate, I figured I could drop a demo of what I've been working on, in the hope of getting feedback. I'm still figuring things out as I make them.

The story (which I hope to add cutscenes for) is that something has stolen your favorite bone, and you need to get it back!

the house exists as sort of a tutorial area to teach how to play, then the real game starts outside!. I've scattered various enemies around the neighborhood, so if you just want to wander around instead of going to an objective, you certainly can.


known bugs:
- Hud only works on some screens
- sometimes your first bark after moving to a new screen hits an invisible enemy. Not sure what is heppening here, likely something isnt being cleared properly in the screen change.
-slowdowns occasionally
-the first 2 screens have boundaries that need to be re-added

Definitly looking for constructive criticism here.
- are the controls okay?
- is it easy to figure out where to go?
- any suggestions on making things work better?
-any suggestions to improve sprites, music, sfx, etc ?
-are the enemies too easy, too difficult?